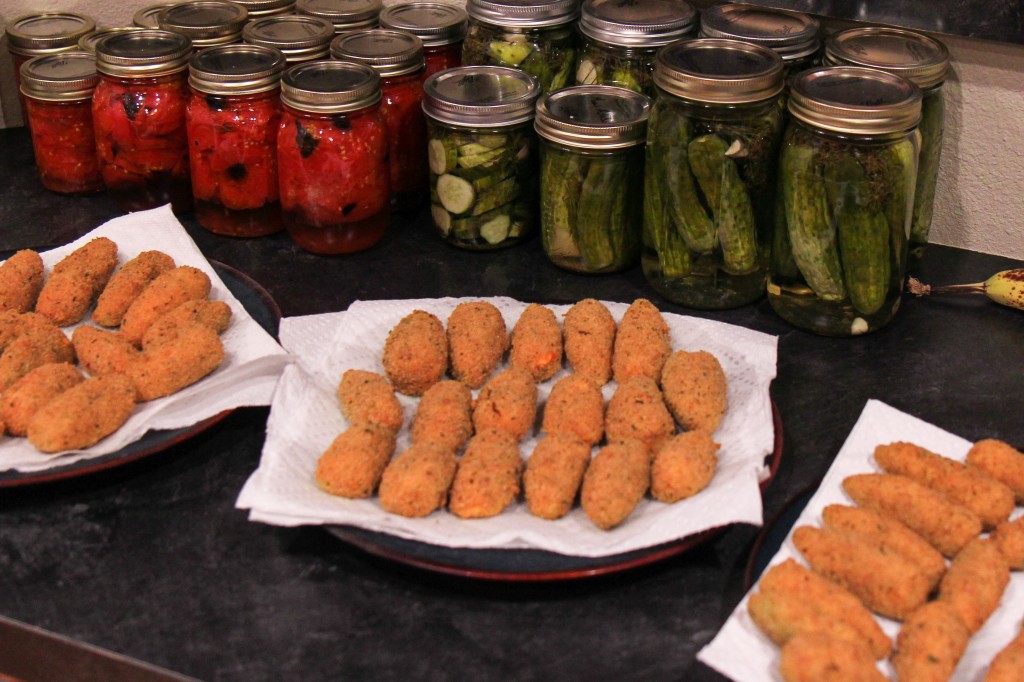 A few epicurean variations on the the bar-food classic.

The Jalapeño plant in our little potting shed went crazy this year and we had far more peppers than we needed for salsa. We decided to try out a few fancy variations on my favorite movie night snack.

They are a bit of trouble to put together, but the freeze very well and stay tasty for many months at least.

We settled on three variations for the filling: Sharp Cheddar with Bacon, Cream Cheese with Sun-Dried Tomato, and Smoked Gouda with Truffle Oil.

Putting the poppers together has been well covered elsewhere, so I’ll stick to what we did differently and what we learned. 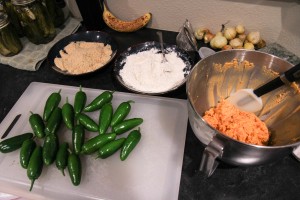 To start with, in the non-cream-cheese filled poppers, cut the cream cheese to be maybe a quarter of your filling or less. Just enough to hold your shredded cheeses together in a shapeable paste. Any more than that and you might as well skip the other cheese anyway, because you wont be able to taste it through the hot cream cheese goo. Shredded cheeses seemed to work to a shapable paste pretty well with minimal cream cheese when we let the mixer or food processor work on them for a little while.

For the variations we tried, our least favorite was the sun-dried tomato. I have never really liked cream cheese poppers, as the tang of cheddar with jalapeños is most of what I like about poppers to begin with. I wondered if the sweet acidity of the tomatoes might do it, but the were still just a little too bland for my taste.

Second best was the cheddar version. These could have been great, but even using extra sharp cheddar we didn’t get enough of that sharp cheese tang and they were still just a bit bland. Next time I want to try blending the cheddar with something sharper, maybe some gorgonzola, to get a little more flavor in there.

The only thing I would change is the truffle oil. I wanted to try some earthy mushroom to go with the smokey gouda, and I thought if mushrooms are good, truffles must be incredible, and if truffles are incredible, truffle oil must still be more awesome than regular old mushrooms. Unfortunately, I was really not impressed with what the truffle oil had to offer. Maybe I got a bad bottle, or maybe the stuff was never that great an idea to begin with, but it had an aroma that reminded me of a chemistry set than a mushroom. Next time I’ll get my hands on some wood ears or something and dice them super fine and see how they do.

The multiple coats of flour and breading described in the linked recipe are essential. Without them you just don’t get enough breading. Its a little time consuming, but if you make a big batch  then you will be ready for coat two on your first ones by the time you get done with coat one on the last.

For that matter, we were not entirely sold on the breadcrumb approach. They stay too oily even if you drain them well. One of these times we will try some variation of a classic fish and chips style beer batter and see how that goes. 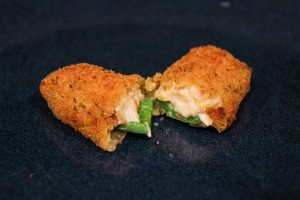 We prepare and cook the poppers as described in the recipe, drain them thoroughly, lay them out on a cookie sheet and freeze them individually so that they wont clump up, then put them in a freezer bag until we want them.

In our toaster oven, we settled on 375 for about 14 minutes, turning them over once half way through.